skip to main | skip to sidebar

It has been a while since I wrote last. I feel bad about that. No excuses, I just stopped being consistent about this. But I love what this habit does to my attitude about the boys and being a mom, so I thought I'd start writing about the boys again ... here it goes:

1. He has this ritual, as of late, to pray for all of our ailments. Which is wonderful and thoughtful, however, he never takes into account that we heal and no longer need prayers in our behalf for an illness we had a few months ago, but he keeps praying for my throat (I had a sore throat at the beginning of February), Liam's eye (which he got stitches for in October of last year), and his own cough (which he currently suffers from). The other night he was listing the ailments off and he peeked out of one eye and whispered to Daniel, "Daddy, do you have anything wrong with you?" Daniel answered 'no' and so Noah ended his prayer.

2. He has begun to get embaressed about things. I knew this day would come. It's too bad. I love seeing children in their tactless way ask questions, take off their shoes in public and pick their noses. It's hilarious. Once about 2 weeks ago we went to the gym and I told Noah to take his snow boots off when we got there. He stood there motionless, got a scrunched up look on his face and whispered in my ear, "But then I will just be wearing my socks!" He seemed mortified by the idea. I told him it was OK and he took off his boots. Today at preschool it was "wear your favorite hat day", so Noah showed up in a hard hat form our dress ups. As we waited to go in, he noticed that some kids weren't wearing hats. He asked me why and I said they probably forgot to. That was not enough for him. He approached one of his teachers and asked, "Isn't it favorite hat day today?" She answered 'yes' and he seemed satisfied with that. sigh. He is getting older and concerned with what others think. He will waste so much time on that over the next 20 years.

1. Liam has become my little friend. He clearly enjoys my company over everyone else's, including Daniel's. But besides that, we spend every moment with each other. Noah will go to preschool and Liam and I will go shopping together, go to the gym together, or hang out at home together. I remember this time happening when Noah was about the same age. When they are 2, they aren't old enough to do very much alone, but they can walk and talk and go with me everywhere, so they do. And so Liam does. He is a fun pal, most of the time. He gives me lots of love and kisses and snuggles. He holds my hand when we walk. I like all of that.

2. We dropped off Noah at preschool yesterday and then headed to the gym. I turned on some music in the car. Liam requested a song. He asked for "Bust it" (Bust a Move). Right at the beginning of the song a guy says "Bust it!" I replayed that beginning over and over again until both Liam and I were laughing outloud. It was fun. Liam has a good laugh. It's not very loud, but it tumbles out of him in a melodious way. Almost a chuckle though. And he always gets hiccups when he laughs too hard. It's adorable.
Posted by francesca at 5:33 PM No comments:

1. Tonight at the dinner table I said, "Noah, your eyes are just glowing!" and Noah said, "what is glowing?" I said, "glowing is like shining". Noah stopped and thought for a few seconds, then I saw something go 'click' in his little brain and he busted out into song and sang, "I am like a star shining brightly! Shining for the whole world to see! I can do and say happy things each day for I know Heavenly Father loves me". It was a glorious moment.

1. He is currently saying "wook! I daw noah un daddy, wook!" He's sitting in the little vintage school desk I got at a recent mom to mom sale and drawing lines with a pencil on a paper. He keeps bringing it over to me and holding it about 1 inch form my eyeball and saying, "wook!"
Posted by francesca at 4:50 PM No comments:


1. Yesterday while sitting at the dinner table Noah said this, “Mommy, I’m SO glad you had me. Because if you only had one Liam and not Noah then you would just have one Liam. And that would be sad.” “Why?” I asked and Noah said, “Because Liam is super, super, super, super mean”. He’s right. Liam has been a living terror for the last little while – screaming, tantruming, hitting … ugh, the terrible twos. I guess Noah is noticing it too.
Posted by francesca at 10:14 AM No comments:

1. We have a Primary Music CD in our car and listen to it everyday now. Today we were listening to the song "The Church of Jesus Christ" and Noah was singing it at the top of his lungs. He stopped singing halfway through the song and said, "Mommy? Did you hear me 'yell-singing'? I was doing that because I love Jesus. He's the coolest guy ever. He could walk on water!" It was an awesome moment.

2. I called Daniel when I was on my way home tonight. He told me that Noah was sitting there on the couch "reading" his joke book in preparation for the Ward Variety Show on Saturday. That brought a huge grin to me face. Noah is our little comedian.

1. His toes are wonderful. His little feet are still chubby and he has cankles.
Posted by francesca at 7:53 PM No comments:

1. Last night while in the car I put on a Primary music CD to listen to. Liam LOVED it. His favorite songs were: Follow the Prophet, Sunbeam, Give Said the Little Stream, and Popcorn Popping. My favorite part was listening to him sing the chorus to Follow the Prophet. He sang, "fah-woah a pofet .... eee no a waaaaay!" It was awesome. He even raised his voice in pitch at the end. Totally adorable.
Posted by francesca at 12:59 PM No comments:

1. Our next door neighbors have a grandson named Adam. Adam is just a few months younger than Noah. Five minutes ago I heard some pounding at my front door - it was Adam. He wanted to know if Noah could come and play at his Gramps' house in their pool (wading pool). Noah was so excited. He threw on some swim trunks, I gave him a towel and had him wear his hat and as I was smearing sunblock on his body, Adam was staring at us in our front room from outside the clear galss storm door. It was totally cute. I love that Noah has friends, and that they can play next door and I can look out my window and see them laughing and jumping around. Yeah for Noah. I'm glad he's enjoying the sun outside.
Posted by francesca at 11:06 AM No comments:

2. He was so happy today because the Ordaz boys came over to play. When Noah gets excited he usually hurts himself and others. He flips around and kicks the air and runs around and waves his arms wildly .... ahhh, it's really crazy. He hasn't played with the Ordaz boys for over a month because they've been on vacation and so this morning when I saw him freaking out with happiness, I just smiled. He just couldn't contain himself and I guess I couldn't really blame him.

3. Noah, Antonio and Alejandro were talking at the lunch table (in and of itself ... that is awesome to watch). You have to see their faces. Antonio usually has a furrowed brow as he talks very seriously about pretty much everything. Alejandro smiles a lot and jokes. Noah is the most dramatic. His eyes get big, he uses his hands to talk and speaks with major inflection in his tone .... so hilarious. They were discussing the solar system, specifically the sun. Noah interjected, "the sun is not just a sun ya know. It's a  (dramatic pause) star (said very slowly)" The boys said they knew that. Noah continued sharing factoids when he said, "Saturn is the planet with the rings around it". The boys then went on to discuss that other planets had rings too .... the knowledge was flowing over lunch today.

1. He's talking so much lately and I can actually understand most of it. When I heard him waking up after his nap, I went in to get him and I was on the phone with Daniel (who has been out of town all week in Colorado, backpacking with Eric and Ian). I asked Liam if he wanted to talk to Daddy, he said, "yeah". He usually just says "hi", "gee" (good) and "yeah" to all questions/conversation on the phone, but this time when daddy asked about what he did with the Ordaz boys Liam came up with "payee ties" (playing with toys). Good for you Liam! I love your sweet face.

2. The weather was so incredibly wonderful tonight that we got Wendy's and went to a nearby park to eat dinner and play inthe sunshine. I set us up on the only bench left at the park not being used. It was directly in the sun. Liam sat down and went to take a swig of his chocolate milk. As he raised the drink, he was staring right at the sun. I watched him. He put the drink down, looked upset, then tried raising it again, this time with eyes tightly shut, but he gave that up just as quickly. He turned to me and said, "Mommy, eee sun eyes". I told him to stand up and turn around and try again. He said, "ok". He did it again, not facing the sun but with eyes still squeezed shut. Halfway through his drink he popped open one eye cautiously, then happily opened the other eye as he ralized it was safe. I love watching this little person figure stuff out. It's beautiful. You can almost see the wheels turning in their head as they think through problems in front of you and I love it.

3. Liam doesn't like to get dirty. A few days ago, we were at a park. Liam was wearing his flip flops. I watched him as he walked around the park. He kept getting tanbark in his flip flops and everytime he did (which was about every 15 seconds) he would stop, rip off his flip flop, pick it up to his mouth and blow on the flip flop to get the tanbark off, then throw the shoes down and try to slide his foot in. This only worked a few times, then he must've gotten too sweaty, because his fat little feet had tanbark stuck to them and when he'd throw the shoe down and try to slip his foot in them, his foot was covered in tanbark. He looked so frustrated and deflated when he yelled out to me to help.
Posted by francesca at 6:25 PM No comments:

On Mother's Day 2010 I decided to start this blog about my two boys - in an effort to try and focus on the positives rather than the poopy diapers, latest wounds, running, yelling, hitting, and total chaos that seems to be my life as a mother. So everyday until next Mother's Day I am doing this experiment. Everyday I will post 3 good things about each of my two boys. Let's see what happens! 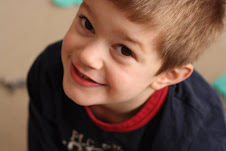 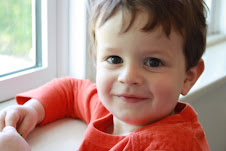